The French tree training system is designed to minimize pruning and maximize production.

In an effort to reduce labor costs, French grower Daniel Sauvaitre recently converted his orchards to the solaxe training system, and is keeping his pruning shears in his pocket. By following the solaxe orchard system, he has improved his average fruit size, tonnage, and uniformity—all with minimal pruning.

Sauvaitre, of Reignac, located northeast of Bordeaux, France, specializes in producing apples for the French market. Varieties that are popular in local markets include the yellow French variety Belchard (a cross of Golden Delicious and Reinette Clochard, also known as Chanteclerc), Rubinette from Switzerland, and GoldRush, a scab-resistant variety from the cooperative breeding program of Purdue, Rutgers, and the University of Illinois (PRI). Sauvaitre also grows Galas, Fujis, and Jonagolds. Rootstocks used are Malling 9 and 26, with tree densities of about 2,000 trees per hectare (810 trees per acre).

He has a brand new packing line—with a presizer and optical sorter—to pack his annual production of about 5,000 tons. He packs only apples from his 60-hectare orchard (equivalent to about 150 acres) and delivers fruit to nearly 30 markets in the region each week,

At one time, Sauvaitre stayed profitable by receiving premium prices for russetted, autumn-colored varieties. But with the explosion of new varieties that can be grown in different regions, he has had to find a niche for his Tastet brand of fruit. Tastet sounds like "tasty" in English. He also had to find ways to reduce his labor costs which average around 12 to 14 euros (U.S.$20) per hour when employer taxes are included.

The solaxe system uses centrifugal training to develop a main trunk and complex fruiting branches or "hands." These hands surround the tree like a hoop skirt and ­produce up to 80 tons of good quality fruit per hectare, said Michel Ramonguilhem, extension service manager from the Bordeaux-Toulouse region in France. That's the equivalent of about 80 bins per acre.

Ramonguilhem explained that once the tree shape has been accomplished, very little pruning is done each year to keep production going. The tree is cylinder shaped, with all branches removed to about a meter high from the ground. The fruiting zone is in the upper three-quarters of the tree canopy. Large branches in the tree middle are removed to prevent them from competing with the trunk.

"You want to keep the branches that are about three to five times smaller than the trunk," he said, adding that large branches growing into the row are also removed. A good relationship between the trunk girth and branch diameter is needed for good tree maintenance and ­management, he added.

Branches hang at around 120 to 130 degrees from vertical. Some varieties have a natural tendency for branch drooping and do not need special training. On most trees, only a few wire clips are needed to bend the branches.

"Bending is used to bring the tree into production faster," Ramonguilhem said. Vigorous growth is necessary at the beginning of the tree's life to establish a solid foundation, he added. Topping trees is not necessary because the terminal growth stops naturally.

Maintaining the tree shape involves three simple actions: 1) removing branches from the trunk if additional light is needed or branches become too large; 2) spur extinction—using gloves on the top and underside of branches to remove unwanted fruiting spurs; and, 3) removing fruit through thinning to achieve desired crop load.

"The most important thing to keep the solaxe system going is having enough light," Ramonguilhem stressed. Light penetrates the solaxe tree from the top, as well as horizontal and diagonal angles, he added. Acting as a light well, the solaxe system improves fruit quality in what is frequently a shaded zone in the bottom of the canopy.

Crop load regulation is achieved by spur extinction—removing fruiting laterals with chemical thinners and hand-thinning fruit buds if necessary. Ramonguilhem recommends removing spurs in the center of the tree and on the underside of the branches as these are less productive. Fruiting spurs that remain are then in areas with better light and will mature more uniformly.

Extinction is done before flowering, using a glove instead of pruning shears to remove spurs. He noted that the spur removal doesn't usually induce new branching.

Pierre-Eric Lauri, researcher with the National Institute for Agricultural Research (INRA) in Montpellier, said that growers in southern France have adopted the extinction technique. Trials have shown that spur removal can increase production while maintaining or improving quality, he stated.

To help growers use an objective measurement in matching crop load to tree size and vigor, INRA developed the Equilifruit, a green, plastic disk. Notches in the disk are matched to the branch diameter with a corresponding fruit number given on the disk. For example, a fruiting branch that is 18 millimeter in diameter could support 15 fruits. With an average of seven to ten fruiting branches per tree, that works out to be about 150 fruits per tree to achieve 60 bins per acre, depending on variety.

"We wanted an objective measurement because there is a tendency to overload the tree," said Lauri. Growers use the Equilifruit to help guide them during thinning and achieve the desired crop load.

Ramonguilhem added that the goal is to leave two to three fruits at the end of the spur. Research has shown that fruit size is usually 10 to 15 percent larger when two fruits are left compared to leaving one fruit at the spur end.

"If growers thin to keep about 70 to 80 fruit on each side [of the tree], they will have good yields," he said. 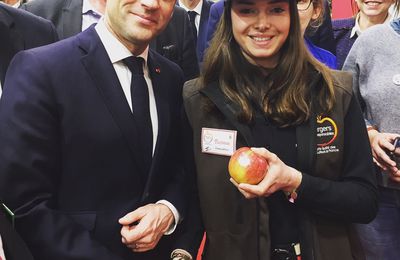